How to use your phone at a music concert

Fancy grabbing a beautiful souvenir photograph of an unforgettable experience? Or sending a quick text to find out where your mates have got to? There are many reasons to use your phone at a music concert.

However, they can be controversial, with some musicians and venues asking fans not to use phones, or even banning them completely! To try to stay on the right side of both other music lovers and your favourite artistes, follow our handy guide for using phones at gigs.

If you want to protect your device from harm, then calling the team at Gadget Cover is essential when searching for the right mobile phone insurance. Our specialist team has over 25 years of experience finding the right cover to suit your budget and requirements. 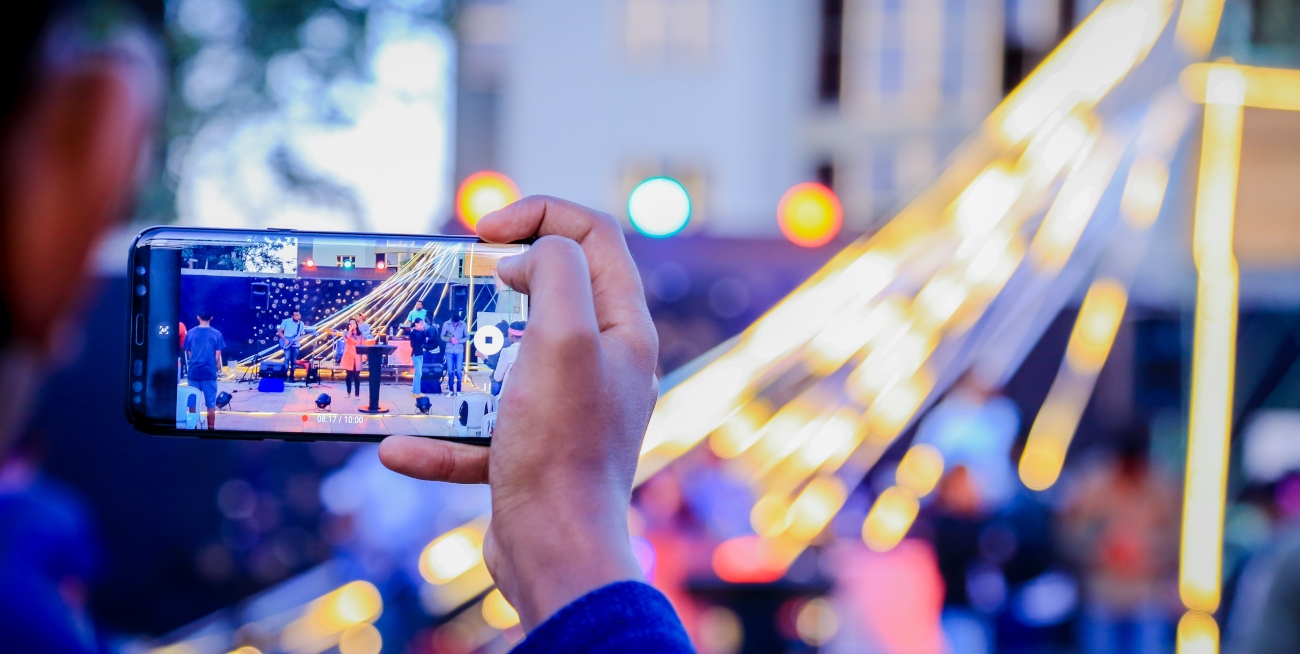 Dos and don’ts of concert phone use

You don’t need us to tell you how incredibly useful mobile phones are, but there’s sometimes a time and a place for them. So, stay aware of what the phone use rules are at the venue or concert you’re attending and respect them.

You might find that whipping your phone out to record a ferocious mosh pit session will be less frowned upon than during a particularly moving candlelight cello concerto. Indeed, Classic FM (who really should know about these things) have some useful pointers on the social faux pas to avoid when you’re next enjoying a bit of classical culture.

You’ve been waiting to hear this line-up for so long and now you’re finally here. Of course, you’ll want to take a decent bunch of photos to mark the occasion. And to have something to pore over when you finally stumble home after a long night. Photos are a great way to stay in the moment, when you aren’t quite ready for the party to end.

But wait until later to post it to social media. You only need to take a quick look at TikTok or Instagram to see that music lovers can’t get enough of social media, but any post can wait a couple of hours. Can’t it? If it really can’t then do it uber-quickly when no one’s looking!

In some concerts, particularly of classical music, venues often ask those attending to wait until the curtain call and applause at the end. That way, you’ve got a great visual reminder of the night but without being glued to your screen throughout the proceedings.

Some gigs and venues will not allow you to video performances because it breaches the copyright of the artist. However, this depends on the particular artist you’re watching and the rules of the venue.

For example, Adele famously called out a fan for filming her concert in Italy, but if you’re watching a small, up-and-coming band in your local pub, they might be pleased with the free promotion if you were to share a clip of them on your social channels.

Plus, if you’re in the middle of a raucous crowd even the best mobile phone might not capture the perfect sound so ask yourself, is it really worth it?

If you are allowed to film, check out our recent ‘how to’ guide to shooting professional video on a mobile phone. 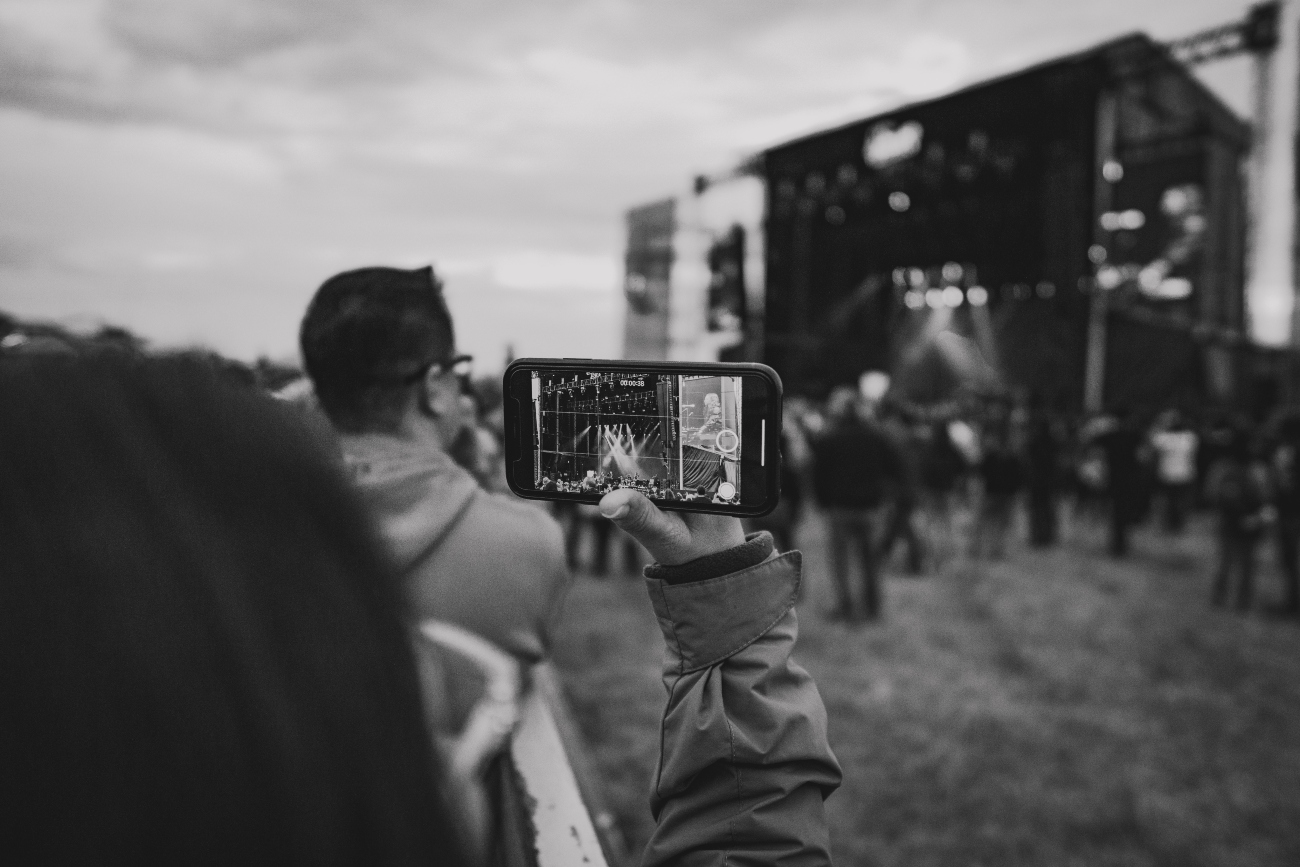 This probably does depend on the type of music and mood of the crowd (and again whether you have permission to film). But when you’ve been going on to everyone about how good this gig would be, and some of them wouldn’t listen, it’s the most natural thing in the world to let them know they were dead wrong! Who knows? If the lead singer is into it, they might even get into the crowd and grab a selfie with you themselves!

You’ve lost your BFF in the crowd and you need to tell them you’ve claimed the perfect spot at the front on the left. Or you’ve finally got to the front of the queue at the bar but you’ve forgotten your wallet. Sometimes you have every excuse to use your phone – it is an emergency after all! Just make sure you put it on silent for any quieter tunes.

Yes, we know we said to dim your phone. But as we all know there comes a time in many concerts when the audience holds up lights as a tribute to their favourite band. It’s much safer than an old Bic lighter, just don’t drop or lose your phone while you’re at it.

Mobile phone insurance from Gadget Cover can help if your phone gets lost or stolen at the gig. Get a quick quote today and start protecting your tech before your next event.

Here at Gadget Cover, we can provide cover against drops, screen cracks, liquid damage, and a whole lot more that could happen during a wild night out. And if you’re travelling abroad for the concert, then we can also extend cover to include use of your gadget anywhere in the world, up to 180 days in any one year. So, plenty of time to follow your favourite band on their worldwide tour, if you so choose! 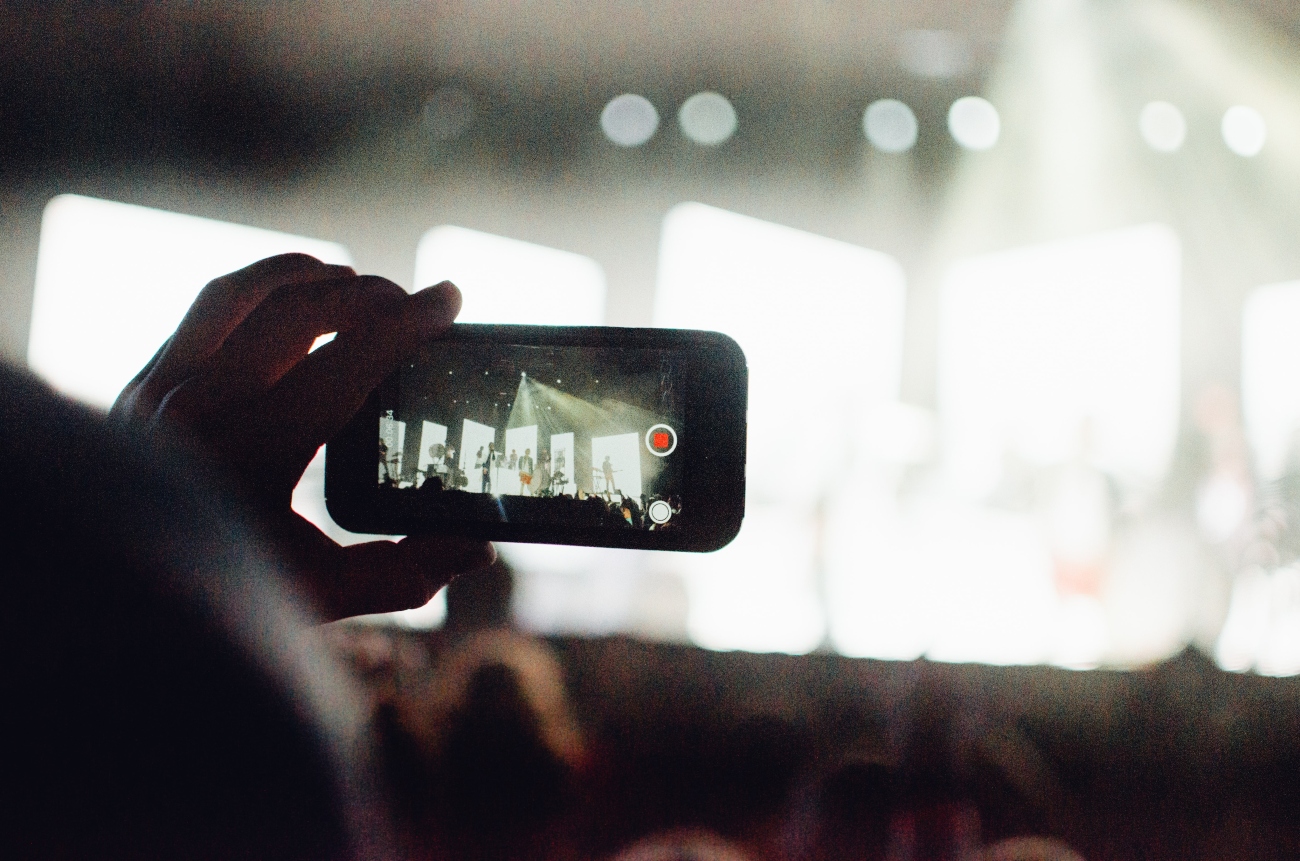 Let’s start at the very basic level first. You wouldn’t shoot using a DSLR camera without first checking your lens for smudges, dust and dirt, would you?

So, why do so many people forget to do so with their phone’s camera? Many camera phones now have seriously good lenses as standard, but they’re just stuck on the back of your phone where they can get very grimy indeed.

Show your phone some love by using a microfiber cloth to get rid of dust, sand, and oils before you start snapping. These cloths are easily available, small, lightweight, and will improve the sharpness of your pics no end.

Depending on the venue rules you might be able to bring a tripod, monopod, or selfie-stick to the concert. If you can then these are an easy way to ramp up the quality of your images. Not only can these photographer’s tools help create impressive low-angle views of the performers and crowd shots from above, but they’ll also work wonders by stabilising your shot.

Use your feet rather than your zoom

Many concert goers use their camera phone’s digital zoom to get close-up shots of their favourite bands. But this is a mistake, as you’re essentially cropping the image before editing. It’s much better to do so after the show with the right app or photo editing software. That way you can give your creativity full reign to adjust the pictures to your liking.

Instead, use your feet and walk around to find the best spot for the perfect photo. That is, as long as you’re not disrupting the concert for others! Gigs in parks and large arenas are perfect for this. An intimate recital in a small venue might not be.

Turn off the camera’s flash

We’ve said this before, but it’s worth saying again. Flash will undoubtedly give you terrible shots of those on stage and fantastically over-exposed photos of the backs of people’s heads in front of you. It won’t be a pretty sight and unless you’ve managed to get right up close, your phone’s flash will do more harm than good.

A much better alternative is to use the concert lights themselves to create the most Insta-worthy images possible. Try capturing the silhouettes made by the powerful backlights, or use the coloured lighting to create dramatic compositions. And if lights are moving fast over the stage, try using burst mode to have the best chance of capturing the most perfectly timed shot.

Get to know your camera’s manual mode

Finding your mobile phone’s manual or professional mode will revolutionize your camera work. It will give you the ability to change ISO values, manually focus, adjust the white balance, and change the shutter speed. Some high-end phones even let you control aperture, too!

If your phone doesn’t have a manual mode, you can use a third-party app. Adobe Lightroom and Open Camera are both highly regarded.

Invest in a new mobile phone

Okay, this might not be an option for everyone, but buying one of the best phones for photography is the mark of someone who’s serious about their camera work.

Protect your device with mobile phone insurance at Gadget Cover

Taking your phone out at a concert can be risky, and opens you up to a whole range of potential issues. Speak to the experienced team at Gadget Cover about our 5* Defaqto rated policies. These can protect you from common issues such as accidental damage, liquid damage, theft, breakdown and unauthorised usage. And for an additional premium, policies can also cover you for loss, too.

Get a quote for mobile insurance from Gadget Cover today.