What are the best gadgets for seniors?

When we’re thinking about gadgets that have been designed to make our lives easier, the list of tech advancements over the past few years really is astounding. From Artificial Intelligence (AI) to Virtual Reality (VR) and the Internet of Things (IoT), technology is moving at a pace even the most tech-savvy of us find difficult to keep up with.

One hugely important area of development is tech for good, i.e. technology that is designed with the purpose of helping society and having a positive social impact.

The focus on tech for good can be especially important to older people and those living on their own, especially if they’re at risk of becoming isolated from friends and family.

A huge part of technology is focused on helping us stay connected, after all, and for some sections of the population, this really has the power to change their lives for the better.

Of course, all these gadgets are only useful when they’re actually with you and working, so you need to have some type of protection should they get lost, damaged or stolen. Insure your phone and other gadgets with ease at Gadget Cover – why not get a quick quote for your devices today?

What gadgets can help old people? 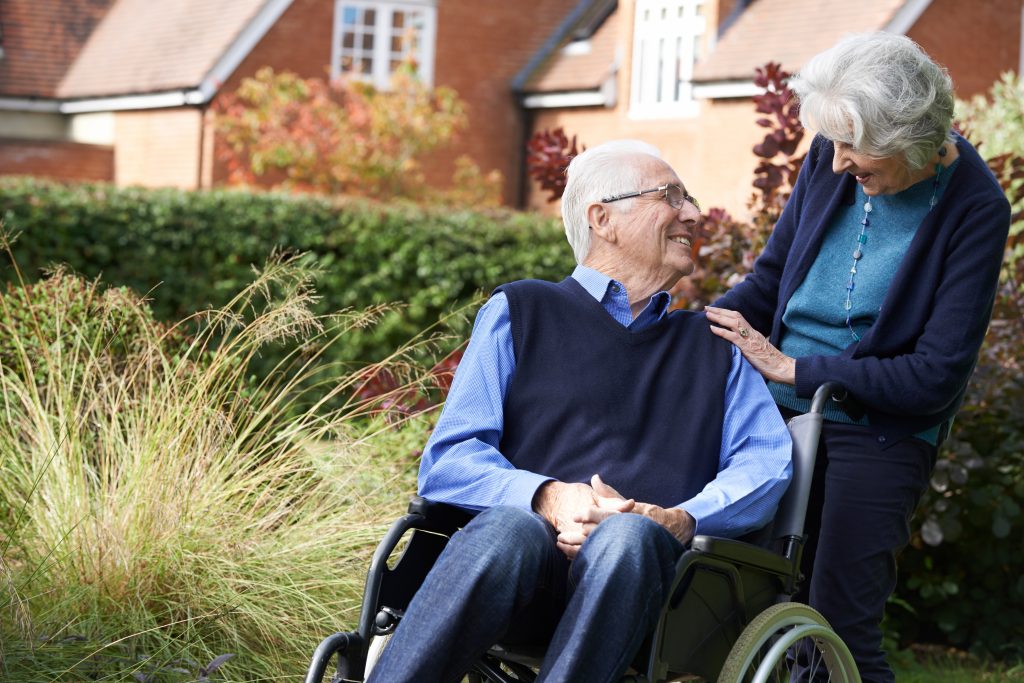 Technology can be hugely helpful when it comes to optimising the lives of older people – think home security cameras that can allow family members to see into their elderly relative’s homes from wherever they are, and even robot carers (potentially a commercially available product of the near future) that could allow people to stay safely in their own homes for longer.

These hi-tech products are aside from traditional pieces of care technology, for example, stair-lifts, that are also in the process of adapting to the needs of the 21st Century.

Assistive technology might mean adapting bathrooms with motion sensors so that carers or family members are alerted in the event of a fall, for example, or redesigning homes so that they’re easily navigable for those with dementia.

Meanwhile, various companies have adapted smartphones and tablets so that they’re easy for the older generation to use, especially if they have impaired vision or other ailments.

Wired identifies Emporia and Doro as key companies to be aware of within this space, and points out the large buttons and the ease of use of the touch screen as key facets that increase usability in this kind of tech for older people.

In wearable tech, the same article also highlights XPLORA, a Norwegian start-up watch company that started life as a tracking tool for parents and allows trusted users to see where the wearer is, and to communicate with them via text.

One other important thing that you might want to think about is voice technology – products like Amazon Echo and Google Home.

Elderly people with reduced mobility could benefit from being able to ask their home voice assistant to do things for them: turn on the TV, call a friend or family member or switch radio station, for example.

In more serious cases, voice assistants could provide a lifeline in case of accidents that might mean an elderly person needs to call an ambulance or family member but is unable to reach the phone. 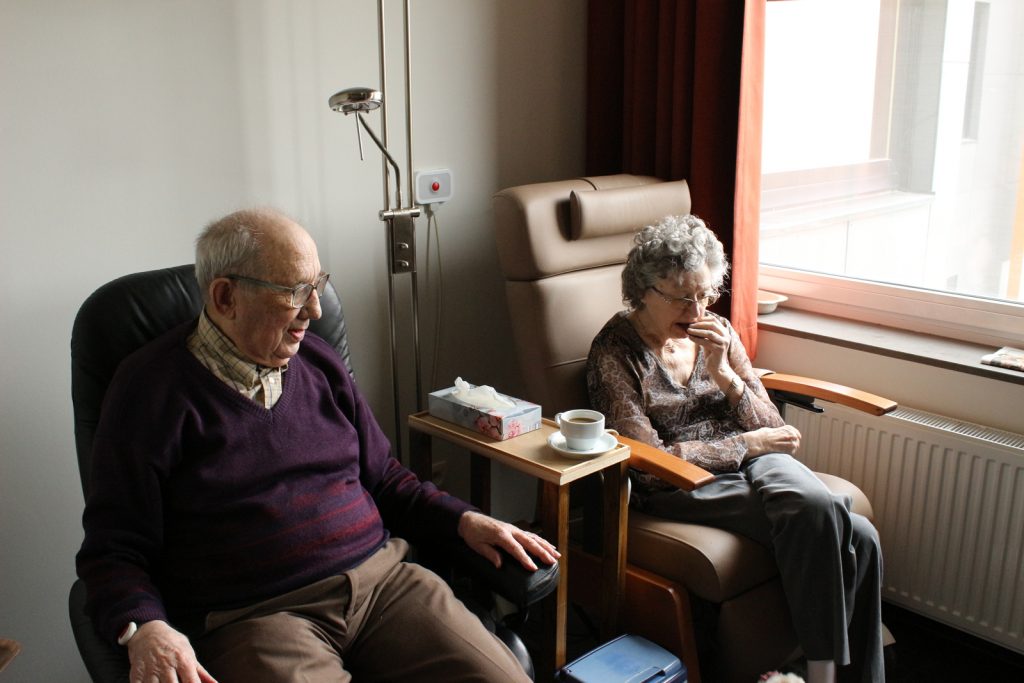 Meanwhile, the prevalence of the Internet of Things means that simple tasks that might be difficult for an elderly person to carry out could be made a whole lot easier.

Run out of milk? No worries – your ‘smart’ fridge knows as it’s connected to the internet and has already ordered another pint.

Of course, if you’re elderly and unsure how to use these items it’s really important that you get help setting them up and know how to make them work to your advantage.

The point of failure when it comes to older adults and technology is their fear and reluctance to engage with it, which can mean that often tech goes unused even when it is bought and set up in their homes for them by well-meaning family members.

To make sure you’re taking full advantage of your techie tools, take time to read the instruction manual fully, get a friend or relative to help you, and test your gadgets to make sure they’re working properly and recognising your voice as soon as you’ve set them up.

There is more information on how home assistants can help out those with Alzheimer’s specifically here.

So which tech products are best for older people?

All of these things can help older people and those with reduced mobility to stay in their homes for longer, whilst vastly improving both their safety and their quality of life.

Here are some of the products that we believe could help older people and make their lives easier, along with their estimated prices and where to buy them. And remember you can get a quote to insure your phone and other devices at Gadget Cover any time. 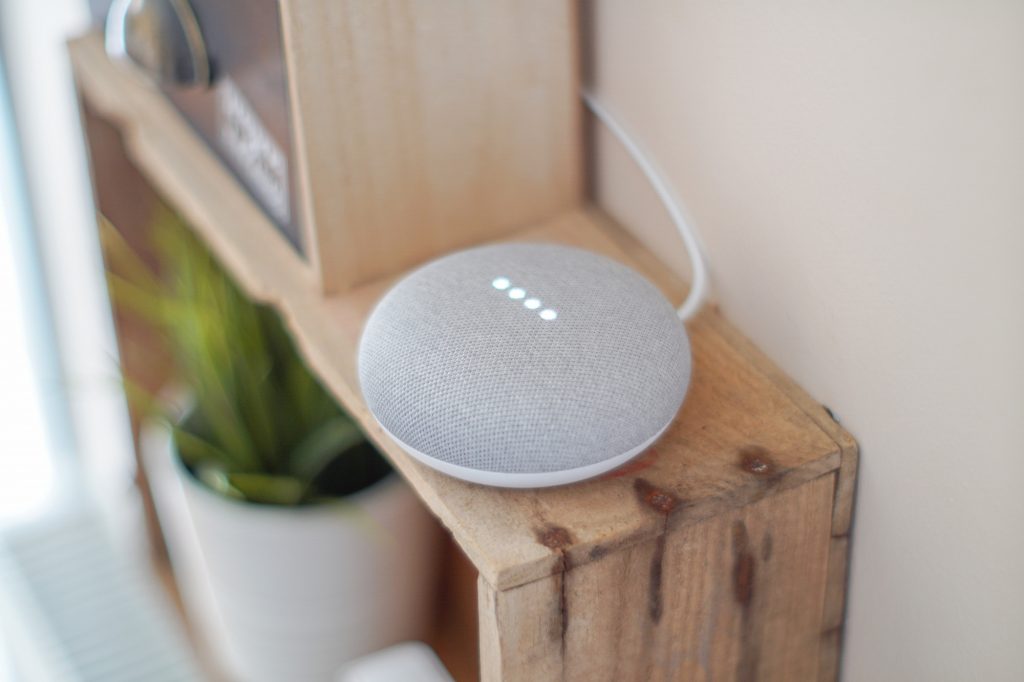 What gadgets are coming out in the future that will help?

Along with the emergence of voice-enabled tech, there are various other technological concepts that might be able to help out the elderly and those living alone in the near future.

In fact, the government has launched a scheme that is designed to make the UK a leader in the world of so-called ‘elderly tech’ by 2035.

It’s hoped that the scheme will generate new ideas on how “the UK can position itself to lead the world in the growing market for age-related products and services” over the next few years.

The technology being developed is likely to include devices to remind people to take their medication, improve the communication channels older people have with family and friends, and create “visually attractive home adaptations”.

It’s hoped that the tech will give people, on average, an extra five years of independence in their own homes. 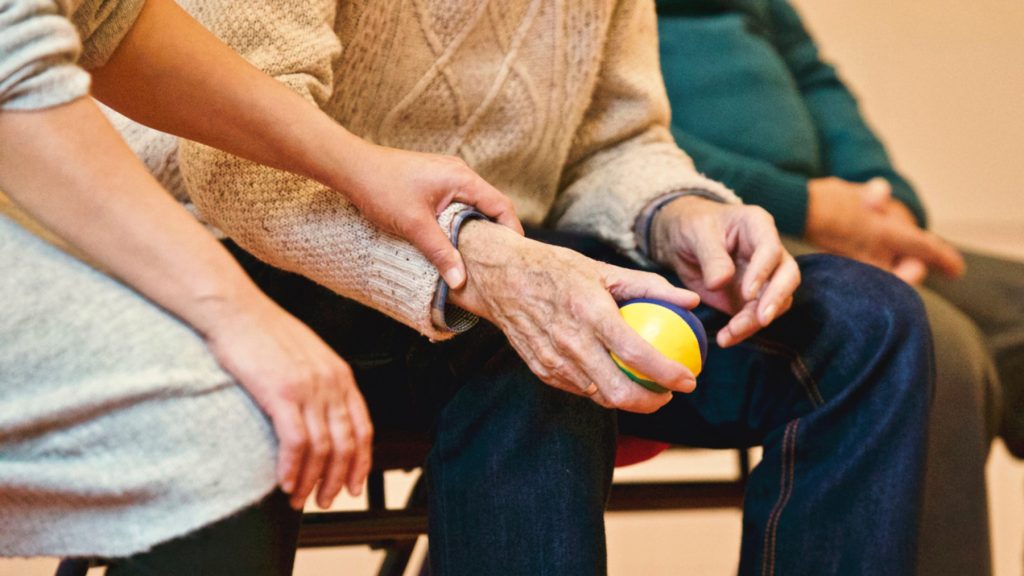 The concept of technology for good is seeing young entrepreneurs work to create solutions to some of the biggest concerns that exist around elderly people living alone.

One example is 13-year-old Freddie from Wales, who has designed a motion sensor home security system, which uses facial recognition to increase household security for those suffering from dementia.

In the US, a fitness tracker belt that can detect falls is already on the market, and is expected to launch (at around the £200 mark) in the UK soon.

Looking further into the future, Age UK believes that the advent of driverless cars will revolutionise how those over 60 get around within the next few decades – something that could vastly increase the independence of those who have decided to give up driving their cars.

Finally, in slightly surreal news, an invention from Japan has seen a “robotic tail” created, that could help older people with their balance and reduce the risk of falls.

A slightly wacky device but one that could bring great benefits.

Best gadgets to help with loneliness

According to a recent article, it’s estimated that there are 1.5 million people suffering from chronic loneliness in the UK.

This is a worrying statistic in terms of societal responsibility and national health, and there’s a monetary implication, too: this loneliness costs the UK economy £1.8 billion every year.

Clearly, this is something that needs to be tackled, and fast.

Luckily help is out there, and there are various tech companies and experts that are working to halt loneliness and improve the quality of life that older people can have within their own homes.

One example is Stevie II, a robot developed by scientists in Dublin that is designed to ease the loneliness of those living either at home or in care homes.

Stevie II is described as “Ireland’s first socially assistive robot with advanced artificial intelligence (AI) features” and adapts so that it can interact with both humans and its environment.

It’s even believed that Stevie II could be used to help older adults with tasks that they might otherwise struggle with, such as video calling.

Robots do appear to be at the forefront when it comes to alleviating loneliness in older people. Robots petswere recently debuted at a technology conference in Las Vegas, and robot carers and home help assistants have been discussed in technology circles for years.

Commercially, gadgets and tech that can potentially help with loneliness include the following: 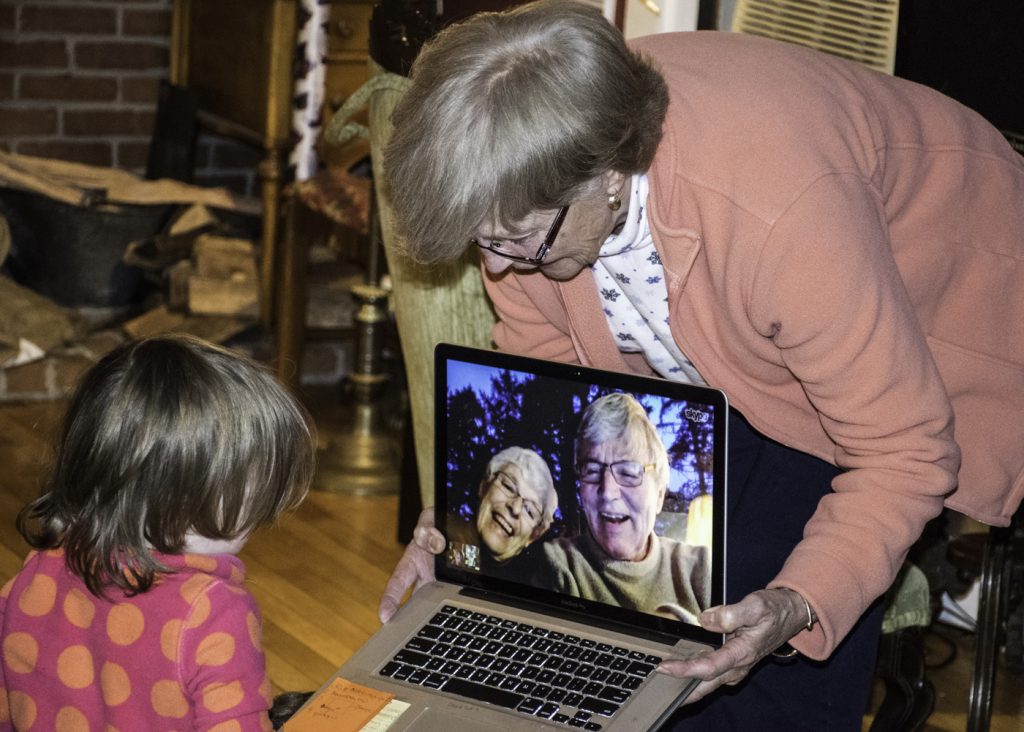 Aside from this, the UK government is also being urged to provide lessons in how to effectively use technology for older people.

There is talk, too, that GPs could soon be prescribing wearable devices (such as the Apple Watch) that could help reduce loneliness and increase outward communication amongst older generations.

At the same time, as people become increasingly aware of the impact of loneliness on society, we’re seeing further initiatives to combat the issues, including this competition, which offers £1 million in funding to the best social isolation-busting tech idea.

What are the best phones for the elderly?

As discussed there are a few mobile phone manufacturers that have designed phones specifically with the needs of the older generation in mind.

Doro and Emporia are definitely worth looking into for their ease of use, large screens, and simple button functions.

The experts at TechRadar have identified some of the best phones for this increasingly techy market. One of their top choices is the GrandPad, which they rate for its simplified interface, large screen and UI, and the fact that family members can manage it remotely.

A possible negative is that it may be too simplistic for some, but we think this sounds like the perfect phone for an absolute novice.

Other top choices from TechRadar include the Jitterbug Flip and the Jitterbug Smart, but unfortunately neither are currently available outside the US.

If your older relatives are a bit more tech savvy but still need the basics like a large screen, sharp display and quick responsiveness, TechRadar recommends the iPhone 8 Plus, iPhone 7 Plus, Samsung Galaxy S9 Plus, and the OnePlus 6.

The key things to remember when purchasing a phone for an elderly person are that it needs to be relatively straightforward, with high brightness, a clear display, and ease of typing.

Whether you think iPhones or other smartphones offer this, or whether something specifically designed for older people might be more appropriate, depends entirely on your own situation and the needs of the person you’re buying for. 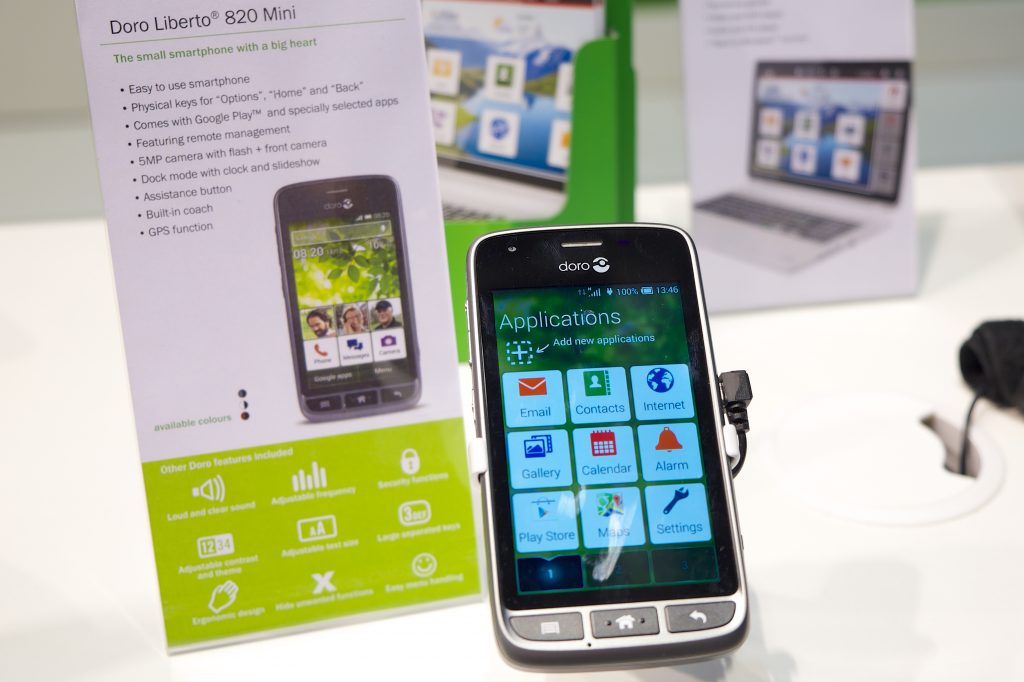 Insure your phone – what to look for in phone insurance

There are some important questions to ask yourself if you’re looking to insure your phone, whichever type of model you’ve gone for. They include:

Ready to discuss insurance for either your phone or any of the other gadgets that we’ve discussed? Get in touch with Gadget Cover here. We can help you find the right level of cover for your device in minutes.