How to use parental controls on a smartphone 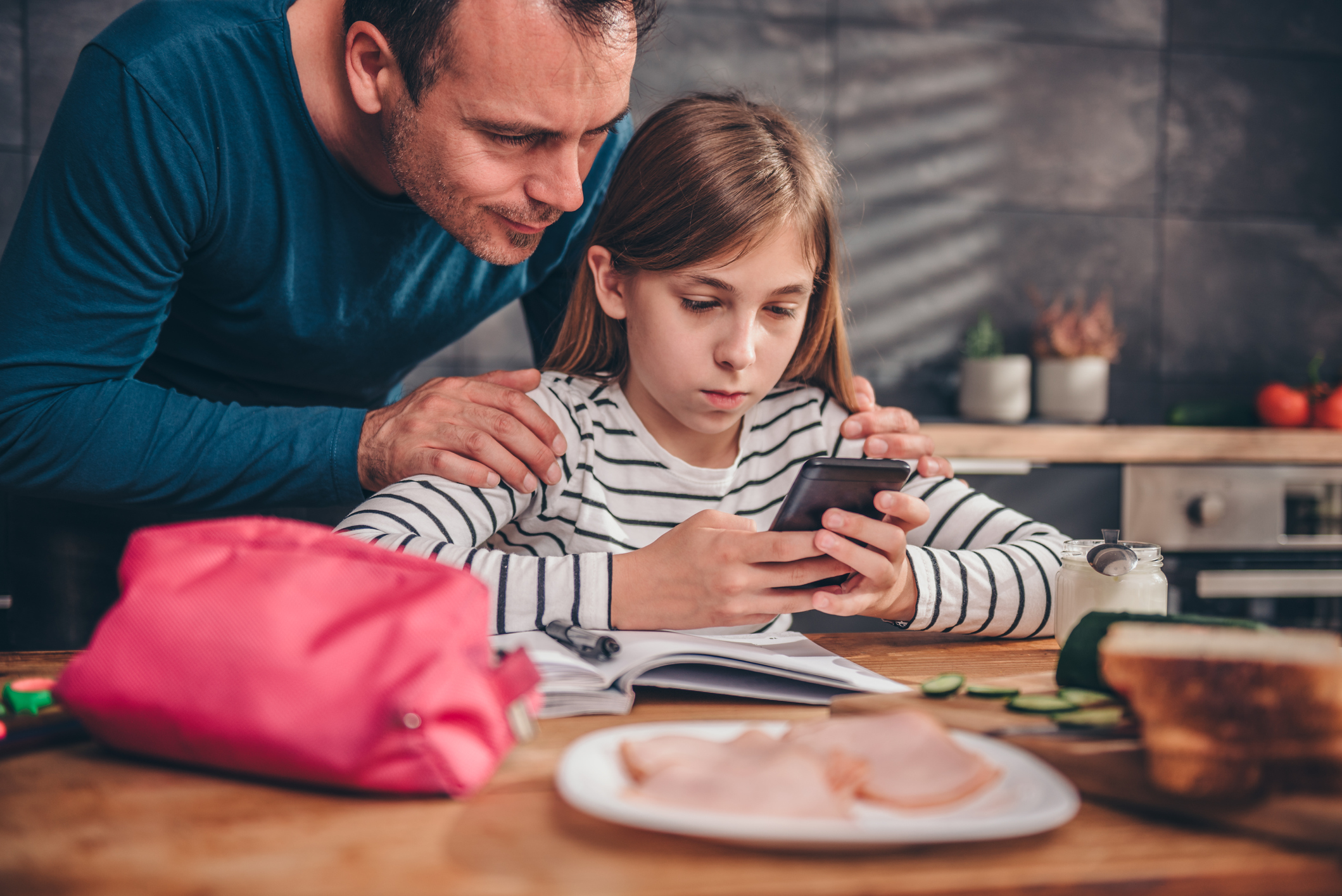 For anyone with kids, you’ll know that trying to ensure they maintain safe and healthy technology usage can be very tricky.

Even today’s toddlers are capable of playing a game or getting online and it’s crucial as parents or guardians that steps are taken to protect them from the dangers of overuse or viewing harmful content.

To make managing your child’s technology usage easier, the latest smartphones have parental controls. So, in theory, you could let your child roam free, safe in the knowledge that they won’t be putting themselves in any harm.

Just make sure the device is covered by phone insurance for your mobile would be our advice!

Not only can you control access to the content your child views, there are means to limit screen time and prevent them from making purchases.

It’s not just about keeping them safe, it’s about ensuring they spend time away from a device – engaging in physical and social activities that don’t involve a screen.

Children spending hours on their smartphones

As a parent or guardian reading this article, you might be wondering what sort of limitations you need to put in place on your children’s smartphone habits. The latest consumption figures might be able to guide you accordingly.

The 2019 poll, carried out by CensusWide for music streaming company ROXI, found that children are spending an average of 23 hours a week on smartphones and other gadgets – which breaks down to 3 hours 18 minutes a day.

In comparison, they spend just 1 hour 43 minutes a day engaged in conversation with members of their family.

The survey of 2,000 families with children below the age of 14 found that more than half (54%) of parents worry that their kids are missing out in some way by spending too much time absorbed in their devices.

Four in five parents said they had spoken to their children about spending less time on their personal devices, with two thirds saying they wish they had more family time.

The UK’s chief medical officer is advising all parents to take more control over their children’s digital habits, and ban smartphones from family meals, and from bedrooms at night.

But how do you go about finding and implementing the parental controls on your child's smartphone? We've put together a brief guide on everything from how to limit their screen time to protecting their privacy.

Obviously, not everyone has the same smartphone – nor the same operating system – so we won’t go into the specifics here. However, what we have done is break down the controls for Apple and Android users. 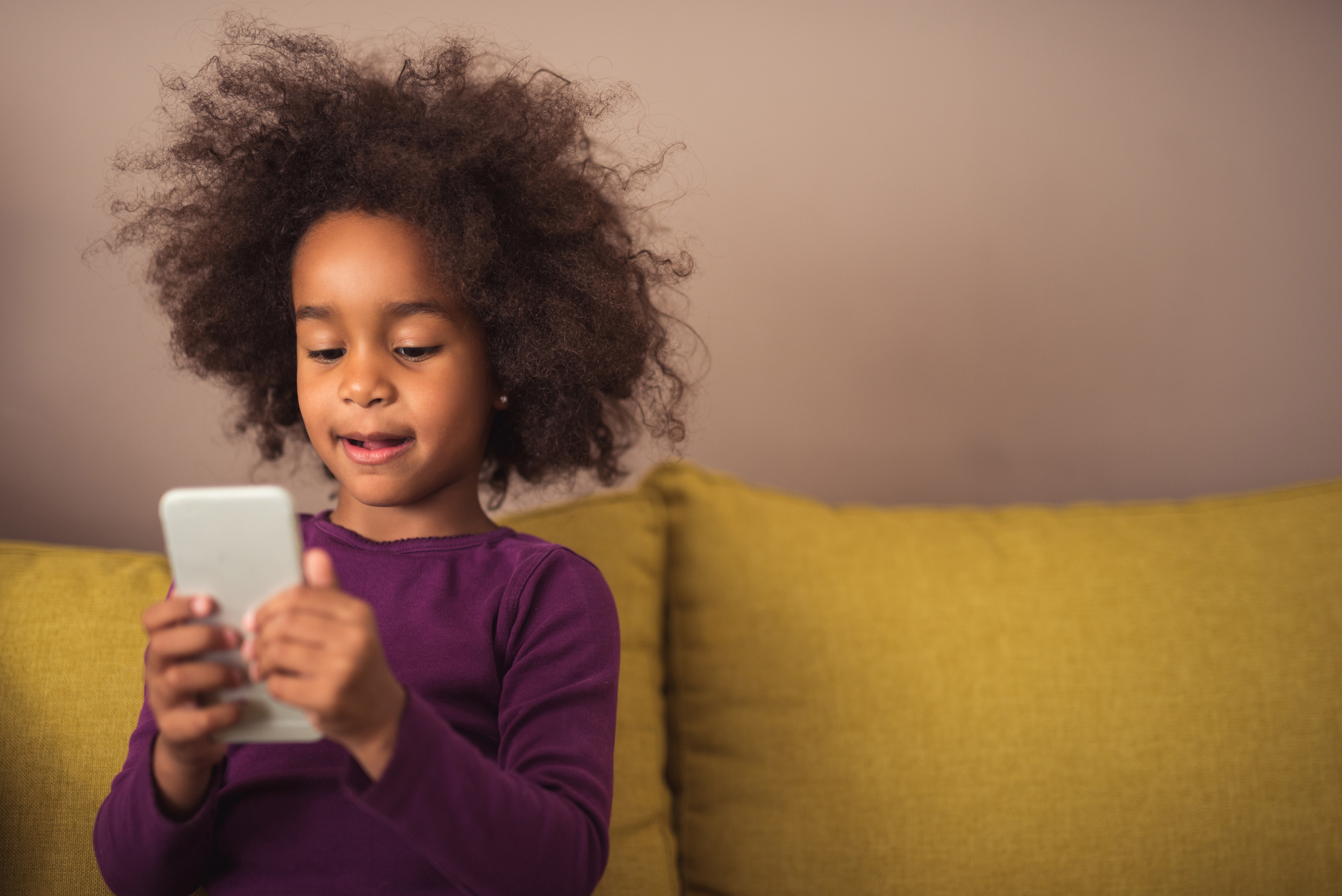 How to limit screen time

But if your child finds themselves being told by the technology itself to put their device down, you might not meet as much resistance.

For Android users: Google's Family Link app, which can be downloaded for free from the Android app store, allows you to create a time limit for daily usage – it might be a good idea to decrease the limit over time, rather than asking your child to make big changes from day one.

The app also allows you to set a “bedtime” period when your child is unable to use the device. This ensures they are getting enough sleep each night and are not distracted by their always-connected device.

If your child wants to extend their usage, they will need to send a request to your phone… and we already know the answer to that!

If you own an iPhone but your child had an Android smartphone, you can still monitor their usage by syncing the app on your device.

For iPhone users: Apple has only recently made parental controls available on its devices as part of the iOS 12 update. Until then, users had to download a third-party app to get a hold of their child’s smartphone usage – or revert to old-fashioned methods of taking it off them and hiding it!

To set up parental controls, you’ll need to go into the phone’s settings. Under ‘Screen Time’, you’ll not only be able to see the daily average time spent using the device, but set limits on usage and schedule some ‘Downtime’ away from the screen.

During downtime, only apps that you choose to allow – and phone calls – will be available. But what child makes phone calls these days? It’s all about messaging for today’s kids.

Like Google’s Family Link, the child can once again send requests for more time to your phone. Perhaps, if they’ve been good throughout the day, this can be used as a reward?

It’s easier than you might think for children to be exposed to content that you would judge inappropriate – especially in the age of social media – so it’s important you take proactive action to ensure they are sheltered from anything that could harm or shock them.

For Android phone users: Android has recognised that a parent might want to share their phone with their children – instead of buying them their own device – and so it’s possible to set up multiple user accounts on a single device.

You can then set about tailoring each account specifically for the user – a five year old might have different restrictions to a 10 year old, for example. Even if it’s your child’s phone, you should consider creating an account and managing it from your own iOS or Android device.

It’s all fairly straightforward stuff, thankfully. Download the aforementioned Google Family Link app from the Android app store; you might already have it on our device having followed the previous points.

The app walks you through the process for creating a Google account that’s suitable for your child. It will guide you through what sort of restrictions to place on the account and, if required, how to link it to your account.

Once you’ve gone through the process of setting up the account, any time your child asks you for your phone, simply log in to their profile and you can pass it over safe in the knowledge they won’t get up to any mischief.

Then, once they’re done – or, more likely, you ask them to return it – just log out of the account and back into your profile and those restrictions will be removed.

To monitor your child’s activity while using the phone – if you want to be doubly sure they’re not seeing things they shouldn’t be – you can do so via the app’s dashboard and email alerts. 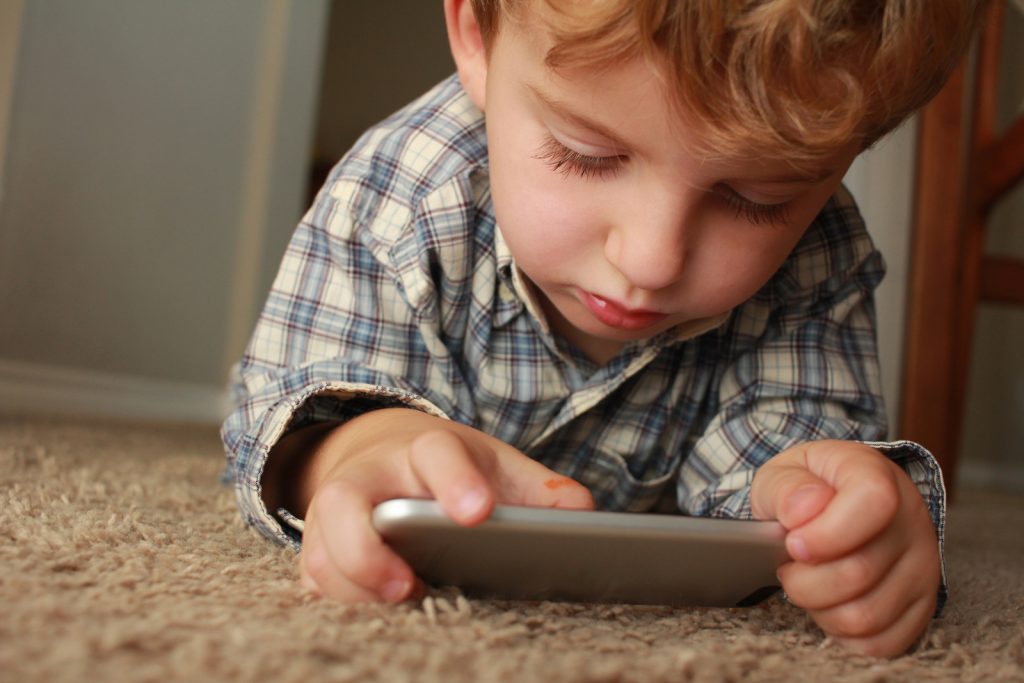 For iPhone users: It’s just not as easy sharing an iPhone with a child as it is an Android device.

Even with the latest update, you can’t easily switch between accounts – you need to log in and out of iCloud every time, which can be a pain.

It’s not all that time consuming, but it is fiddly to say the least and might lead you to decide to buy your child their own phone instead.

Either way, you’ll want to ensure they’re not landing on content they shouldn’t see. So, head again to the ‘Screen Time’ options and scroll down to ‘Set up Screen Time for Family’.

If your child doesn’t already have an iCloud account, you’ll need to set one up for them.

Once you’re logged into their iCloud profile, you can go about setting limits and restrictions on iTunes and App Store purchases, downloaded apps and content in general.

For instance, you might want to prevent your child watching 12, 15 and 18-rated movies and TV shows, or stop them from listening to music and podcasts with explicit material. Adult websites can be blocked, too, as you might hope and expect.

Again, via the Screen Time settings, you can check what content your kids have consumed and adjust the controls remotely, if necessary.

When you select your child’s profile, alongside the various limits you set you’ll be presented with a real-time report on how they’re spending their screen time.

If you find them spending too much time gaming, for example, you might want to set a new limit for that app.

The Screen Time settings aren’t just a useful tool for those who have kids. As Apple suggests, many adults are now more aware of the amount of time they spend on their phones.

The Screen Time settings could be used as a way of limiting the amount of time you’re spending looking at your device. Perhaps you’re finding your phone to be too much of a distraction at work or you’ve got into the habit of checking it during the night?

By self-imposing some restrictions, you can make the relationship you have with technology a healthier one. But, when it comes down to it, there’s nothing stopping you from going back into the settings and removing the restrictions…

We live in a world where people are documenting every aspect of their lives on social media – but understandably you might want to protect your child’s privacy; at least until they’re at an age where they can make an informed decision about how much of themselves they want to give over to the world.

Apple and Google both offer parental controls to effectively protect your child’s privacy but, again, you have to go about it a different way depending on what operating system you’re using.

For Android phone users: Once again, the Family Link app comes up trumps: you can prevent your child from sharing Google Photos – of themselves or indeed you and other members of the family – and limit Google’s ability to save information about your child’s browsing history, voice commands, and other activities.

Sure, Google might say that it’s ‘improving’ their experience, but ultimately it’s at the cost of their privacy.

Perhaps you want to go one step further and block access to social media apps? Just select the appropriate App and Games setting where you can set the age restriction to "10 and up" or "younger."

However, it’s worth noting that this doesn’t block the websites for those platforms from showing up in the device’s web browser. 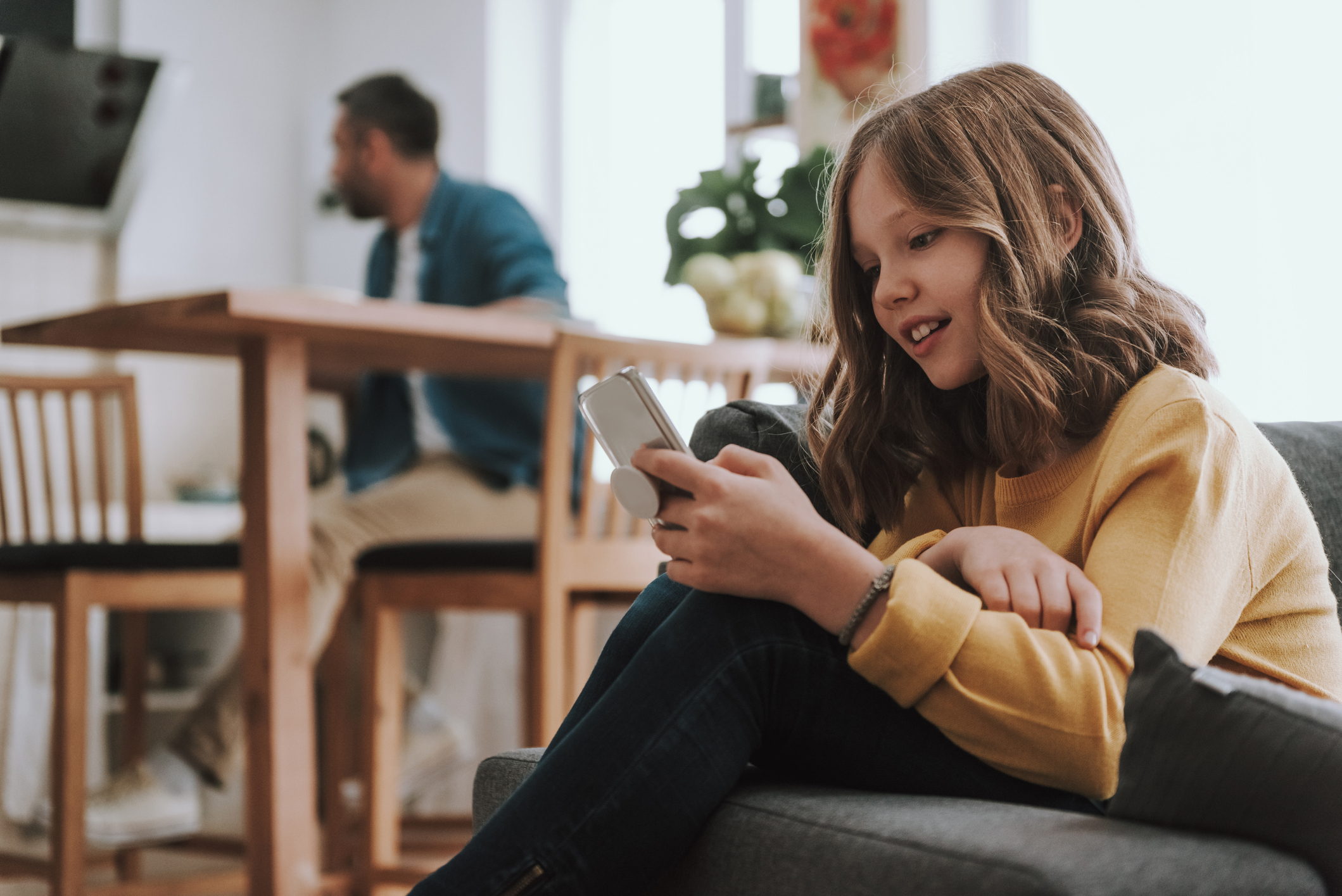 For iPhone users: Head back into the Content & Privacy Restrictions tab in the Screen Time settings menu, where you will find a slew of privacy controls. Here’s what you can allow and disable:

One more thing to consider

As you consider how many restrictions to put on your child’s device, take note of a recent piece of research which found that more than half of children sleep with their mobile phone beside their bed.

When phones are always so close at hand, as a "private and personal technology", he adds that it can be tough for parents to put limits on how children use them.

Just something to keep in mind as you attempt to control your child’s technology usage.

With your smartphone now fit and ready for your child to use, make sure it’s covered with mobile phone insurance courtesy of Gadget Cover.

We can provide insurance for your phone if it’s less than 18 months. Once purchased, there’s no limit to how long your gadget can be covered. You also need to make sure your device is in good condition and full working order, and that you’re able to provide proof of ownership.

For peace of mind that your smartphone is well protected against life’s little mishaps, get mobile phone insurance with Gadget Cover today.

Get a quote today – and in the meantime, why not check out our other blog on 12 iPhone apps to improve your life?